New Brunswick has committed to achieving GHG reduction targets of:
The 2014 – 2020 plan builds on the previous plan from 2007.

New Brunswick introduced a five-year Climate Change Action Plan in 2007.Under the plan, New Brunswick-led initiatives are expected to  result in greenhouse gas emission reductions of 5.5 megatonnes (millions of tonnes, Mt) annually in 2012. The plan includes actions in the following areas:

With the assistance of federal initiatives, the plan sets a target for the  reduction of New Brunswick’s greenhouse gas emissions to 1990 levels in 2012 and to position the province to realize further reductions of 10% below 1990 levels by 2020. 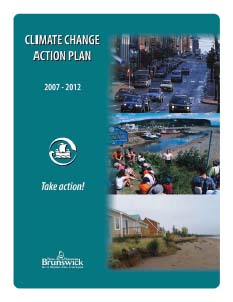 New Brunswick is also actively supporting sustainable development at the community level through Community Sustainability Plans.  These plans are community management plan that aim for environmental, social and economic sustainability in a livable community.  They are integrated and inclusive and action oriented.

New Brunswick produces annual progress reports on their Climate Change Action Plan.  There is also a special website set up to track carbon emissions and for individuals to measure their own carbon footprint.