B.C has finished a consultation period on a new climate action plan. A new version will be released for consultation in the near future.

British Columbia is the first province to make the gutsy call to implement a carbon tax.  The carbon tax is revenue neutral, meaning every dollar generated by the tax is returned to British Columbians through reductions in other taxes.

The carbon tax is a solid sign of commitment to take action in support of the BC Climate Action Plan, released in 2008.  It outlines strategies and initiatives to take B.C. approximately 73 per cent towards meeting the goal of reducing greenhouse gas emissions by 33 per cent by 2020.

Key targets under the plan were entrenched in law with the November 2007 Greenhouse Gas Reduction Targets Act: 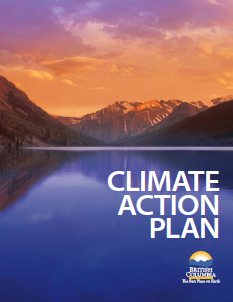 The climate plan sets out goals for seven key areas:

BC has also introduced a Climate Adaptation Strategy to address three main themes:

A more recent report, “Climate Action for the 21st Century”, builds upon the original plan.

Live Smart BC is the public face to the province’s climate plan.  It features programs and incentives designed to help people and communities shift to a greener lifestyle.  There’s a lot of programs and support to be found on the Live Smart site, including Living Water Smart and a comprehensive product stewardship program, delivered by local governments and partners of the province.   2014 update: Live Smart will be transitioning from government to utility management, which will likely mean the focus will be on electricity conservation alone.

BC also appointed seven regional Citizens’ Conservation Councils on Climate Action in 2008 to help build a network for grassroots climate action across British Columbia.  The councils submitted their reports in December 2009.

Every two years, as required under the Greenhouse Gas Reductions Target Act, the government publishes a progress report. Climate Action in British Columbia: 2014 Progress Report is the latest report.